A month or so ago, my family and I stayed at the Shaw house for a weekend as we often do these days.  That Saturday night Wyndham wanted to teach my son, Micah, an impromptu lesson about fishing—to impart the tenets of the sport that’s been a big part of his life from an early age.

The scene that ensued was mildly heart-wrenching—my father-in-law there in his wheelchair in the living room, his grandson on a child-sized yellow folding chair in front of him with his yellow note pad in hand, taking in every word and jotting down the key points. While my wife fought back tears, I gathered that there was an intense expression of love transpiring between master and pupil. 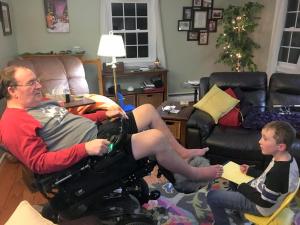 Wyndham is passionate about fishing. If you could watch him in action on a boat with a rod and reel in his hands, you would soon realize his love of the sport goes far beyond hobby. His drawn-out fishing trips with his friends and family are the thing of legend.

What is amazing about Wyndham is that as he loved fishing so much, and similarly loved people, he couldn’t help but want others to participate with him.  He found so much joy in fishing that he didn’t really care what you thought of it, he just wanted you to experience it too!  Fishing brought a peace and freedom that drove him—in the midst of the waves and the shouting of orders at lesser mates.  I’ve never seen such a thing before, nor have I ever been able to achieve it personally.

I believe he understood there was a deeper, intrinsic value in fishing than just the sport itself.  It brought a comradery. It seemed the longer and more arduous the trip, the deeper the bonds that eventually developed. 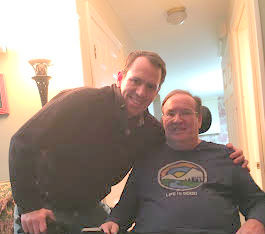 But as I watched my son in the midst of this lesson, I believed there was something else going on.  Wyndham was now trying to pass on to my son what he believed was of utmost importance. There was something about this sport he has enjoyed for so many years that he felt he had to pass this on to Micah, even after his own ability to participate has left him.

Wyndham loves to pass things on.  Recently, we acquired two fishing poles from his vast collection for Micah’s further benefit.  A few years ago Wyndham bought a chainsaw and became a bit of a travelling wood-cutter-for-hire in order to boost his firewood stock.  This past Christmas I received a new chainsaw as a gift from him, and an unwritten invitation to pick up where he had left off.  Eight years ago, when his own dog, Jordan, was growing “long in the tooth,” he brought golden retriever puppies home from Colorado for my family and Sam’s family so we could train them in Jordan’s shadow.

Having lived with my wife for close to 10 years now, I’m beginning to realize the breadth of Wyndham’s ability to impart.  He is a peerless dad to his kids.  My wife’s ferocious loyalty to him is a testament to this. So much of how we love and discipline our children is based on the example that was set by him, long before I ever met him.

But there is one thing Wyndham is even more passionate about delivering to others than fishing or family, and that is the Gospel.

For over forty years, he has sought to embody the simple facts that Paul spells out in this scripture.

The Gospel is hard to believe; to live by it an even more difficult calling. It is not the popular opinion; it is a narrow road.  Wyndham’s life’s work has been to pass the gospel on to others.  But beyond that, he’s helped me understand that the gospel is so powerful it must pervade every aspect of our lives once we receive it.  It is not only the path of our salvation, but it becomes our code of conduct until that salvation is realized in the end.  It’s our source of faith but also our ability to forgive; it’s our hope in the life to come, but it defines the way we treat others now.  The gospel is of first importance in every way.

For all of the great spiritual victories my father-in-law has accomplished in his life some of his most powerful stuff has been transferred in just the last few years, while in his weakest physical condition.  I see the gospel being lived out in the most real way through the joy he still has, though he’s been stripped of his ability to perform the most basic physical tasks—much less fishing and hunting.

Yet, now I understand that those things pale in comparison to the hope he has because of the gospel.  I have seen no more powerful example of the reality of the gospel truths, than the way Wyndham has endured the pain and loss his disease has brought on him.

As I listened to him wrap up his instruction on fishing, I was struck by the fact that even in the act of imparting his tidbits of wisdom, he had conveyed the most profound lesson about the gospel to my son.

9 thoughts on “Wednesday Wisdom With Wyndham – 46”