Wisdom and the “Gold Standard”

To refer to someone as being the “gold standard” means that they are the ultimate example of the subject being discussed. To me (and many, many others), Wyndham is that example of godly wisdom. He is a great listener, who listens with empathy and concern coming out of the pores of his skin, even when he is silent. When some elders come into a group of disciples, some among the group feel apprehension just because to them elders represent authority figures. When Wyndham enters a group, people are most often relaxed and/or relieved, knowing him to be a “safe” place. That wonderful quality frees others up to be totally honest with him, a key part of getting real help.

Elders are also called by the biblical terms shepherds and overseers. An overseer is one who sees the big picture. He thinks in terms of both the immediate and the future as he asks: What do we need now and where will this lead in the long run? The shepherd is one who is focused on the individual sheep in the flock, noticing the ones who are weak or who have wandered. Some elders are better at one of these roles than at the other. Wyndham is equally good at both. He thinks in-depth and then speaks in-depth. Few can match his analyses of individual disciples and situations.

Up until a few days ago, I wouldn’t have thought about using the term gold standard in reference to Wyndham. What triggered my thinking was a conversation about a leader in the Philippines. I described him as a man who was prematurely gray, but with the wisdom to match – in spite of his relative youth. Then this statement just popped out of my mouth: “You know, he’s a guy sorta like Wyndham.” That made me realize that he was my gold standard of an elder’s wisdom.

Hopefully most of us older leaders have grown sufficiently in wisdom to do a credible job as leaders. But for the large majority of us, we had to grow into it. Somehow our gold standard brother got an early start. It was God’s blessing to him, but a blessing to be shared with others. No one has been better in sharing wisdom. A sports announcer said the same about Wyndham’s favorite professional quarterback at the conclusion of the Super Bowl. As he said of Brady in his profession, I say of Wyndham in his profession of serving others: “He’s the best I’ve ever seen.” 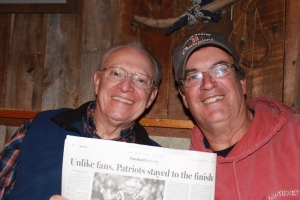 30  The mouth of the righteous man utters wisdom, and his tongue speaks what is just.  (Psalm 37:30)

2 thoughts on “Wednesday Wisdom With Wyndham – 55”