It was a pivotal time in my life. A time when I could have sold my soul to bitterness. Thankfully, Wyndham’s wisdom (and humility) prevailed.

We had been in the ministry for eight years. I was 28 years old and Wyndham was 30.  He had been preaching in a traditional type church for 3 years. We had led campus ministry for the previous five years, but this was his first preaching job. The church was growing, but the leadership was not united. In fact, one of the leaders would stand at the back door after Wyndham came down from the pulpit and pass out negative literature about us to the people who were leaving.

One woman called and swore at me, and I never even knew why. We were away one week when one of the leaders called and told my husband he should find a new job, as he wouldn’t be able to stay there. Fired. The reason stated was this. “We don’t have any problem with what you are preaching. It’s the Bible. The problem some people are having is that when you come out of the pulpit, you expect people to follow it! And they don’t want to change.”

I was angry with the leaders and their decisions. I felt we had been wronged and were treated unfairly. That was true. I felt, as James and John (in their immaturity) stated in Luke 9:54 like calling down fire from heaven to destroy them.

As Wyndham delivered his last sermon I was waiting for him to “let them have it”— firmly rebuking them.  Instead, he took the high road. He called them to follow Jesus, but then apologized for anything he had ever done to hurt anyone.

What?!  I then struggled with my husband. Why didn’t he let them have it!  Bitterness was growing in my heart.

But he understood the wisdom that comes from God.

Who is wise and understanding among you? Let him show it by his good life, by deeds done in the humility that comes from wisdom.
But if you harbor bitter envy and selfish ambition in your hearts, do not boast about it or deny the truth.
Such “wisdom” does not come down from heaven but is earthly, unspiritual, of the devil.
For where you have envy and selfish ambition, there you find disorder and every evil practice.
But the wisdom that comes from heaven is first of all pure; then peace-loving, considerate, submissive, full of mercy and good fruit, impartial and sincere.
Peacemakers who sow in peace raise a harvest of righteousness. (James 3:13-18)

He found the high road and took it, never giving in to bitterness but trusting that God would take care of us. We just needed to be humble and trust God. I had to have some talks with the elders and some soul searching times with God. I realized that Jesus could have sinned even as he hung on the cross. Perhaps he faced his greatest temptation while on the cross! The temptation to be bitter. He was unimaginably mistreated. Yet he said to the angry crowd as they spat and swore and crucified him, “Father forgive them. They don’t know what they are doing.”  (Luke 23:34).  As I read I thought…what do you mean? Of course they knew. Why did he say that?

I do believe they still needed to repent and be baptized to be forgiven (Acts 2:38). But, perhaps Jesus said those word to rid any temptation of bitterness from his heart. If Jesus was not bitter, what right did I have to be bitter? I don’t deserve forgiveness, but Jesus gave it to me.

So, I let it go, and following the example of Wyndham’s “wisdom from above” –truly forgave. God’s word was still true, and his plan for the church was still his only plan. I have hurt others so who am I to hold on to hurt?

I shudder to think where this bitterness would have led me had my husband not taken the high road. I would have lost my soul had I held on.

Soon after, a brother that had been converted in our campus ministry asked if we would be willing to move where he lived to start a church. 13 disciples were there and were willing to support us. One of the families invited us (along with our two girls and a child on the way) to live with them. We had no insurance and no money—but a lot of faith. God blessed that decision and never deserted us. Instead, he blessed us. 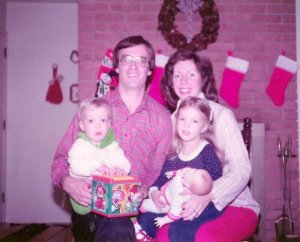 We all have temptations to grow bitter. Yet we all can make the decision to take the high road. Which road will you travel? Wisdom finds the high road.

6 thoughts on “Wednesday Wisdom With Wyndham – 17”