The mouth of the righteous man utters wisdom, and his tongue speaks what is just.  Psalm 37:30

Over the years I have observed and been inspired by Wyndham’s impartiality with others, his wisdom of relying on the talents of both staff and non-staff to plant and water, and also his laughter and joy in both the mundane and the extraordinary. 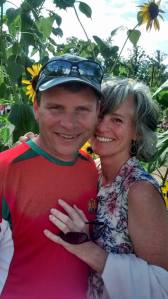 I observed early on in our marriage and while working with him in the ministry that Wyndham was a fair man. On one occasion, while gathering his family for some outing, his older daughter Melissa (probably early middle school to be fair to her) was undone by some issue (use of a cooler??) that from my viewpoint required him to tell her to deal with her attitude and get in the van. He spent time gathering the facts from her, dealt with her presentation, found that she had a very legitimate claim. He then promptly rectified the situation, and everyone went away satisfied. It is difficult for everyone to go away satisfied in any conflict, yet on many occasions, this was the result of his mitigation from a spiritual standpoint (Exodus 18:23…and all these people will go home satisfied).

I was most affected in my own character change by an observation which both Wyndham and Gordon Ferguson gleaned by spending time with my dad playing a few holes of golf. Through their interaction with my family they were able to gain real clarity on my interaction skills with others. Wyndham and Gordon were able to speak directly to what they saw, and to this day that feedback has changed my life significantly.

One fun thought of a shared experience with Wyndham. On one occasion Wyndham and I were driving to a Bible study in Fitchburg, Massachusetts, when he and I got pulled over by a Massachusetts State Trooper. As the Trooper approached the driver side of the mini-van, I made the mistake of asking Wyndham where his registration was located. In this particular car’s make and model the glove compartment was located under the passenger seat.

I reached under the seat to retrieve the document, only within seconds to have my door ripped open with the officer training his gun on both of us.  I still sort of laugh at the picture of both an elder and a minister standing at the front of the vehicle, hands on the hood, being searched while my Bible and papers were blowing outside on the pavement. I enjoyed laughing with him at the juxtaposition of our purpose and the purpose of that officer. BTW – Wyndham was not speeding, it was a random stop of vehicles matching his vehicle’s description for a crime committed in another county.  (Wisdom also keeps a cool head.)

These are just a few thoughts of how my friendship with Wyndham, and his sharing of his wisdom, has changed my life. I believe this has affected the character of my two boys and ultimately how they will raise their future children. Wisdom does that. It changes lives.

3 thoughts on “Wednesday Wisdom With Wyndham -14”