The good news is that our electricity is back!  Just as I had taken the last of the used- to- be frozen things from the freezer it came back.  Yes, we will be eating lots of fish and pheasant, as will our neighbors. I hurried to my daughter’s house, to pick up my things and our dogs and return home.

Jordan, our 14 year old golden retriever, was on the floor when I arrived and could not get up. He looked disoriented and scared…in really bad shape.  I called the vet, who was eager to see him.  When my son- in- law returned from work, he loaded Jordan in the car so I could take him to his appointment.  Fearing the worst, I cried all the way there…praying and telling God that I needed my husband for this scary trip to the vet.  Wyndham was on a plane, due to arrive home later in the night.

When I arrived at the vet, I began to sob… thinking of all the wonderful memories with Jordan and that I might not ever take him home again….and that my husband might not be able to tell his beloved dog goodbye.  The doctor (who is very partial to golden retrievers) brought him in for examination and explained that he had Old Dog Vestibular Syndrome.  The great news was hearing that in 85% of cases it clears up within the week.  Happily, we loaded him back up and my neighbor brought him in for me.  I was told that he would be a total invalid during this time and needed extra TLC and reassurance…as it was frightening to him. He would have to be carried outside (and he weighs 60 pounds). Wyndham arrived back late…and carried him out then and again this morning in hopes he would figure a way to relieve himself (which amazingly he did though I will spare you details). This syndrome causes a dog’s head to tilt and eyes to twitch. They are often nauseous because they lose all sense of balance – not knowing which way is up or which way is down.  Watching Jordan try to walk is pitiful.  He looks like an old man in a drunken stupor…who wobbly walks in circles and then falls down.

As I heard him whimpering before daylight and went out to lay on the floor beside him (a mother’s ears are always tuned in to pain) I realized that perhaps I was pretty pathetic looking – laying on the floor with our dog while our other dog stretched out on the sofa above me. 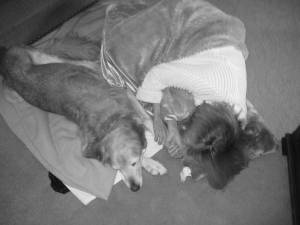 Immediately after I arrived, Jordan fell back asleep beside me. Since the floor was kind of hard, I did more thinking than sleeping.  I thought about how Jesus felt about those around him who were completely disoriented by their own choices and their lack of looking to him for direction. Mark 6:34
When Jesus landed and saw a large crowd, he had compassion on them, because they were like sheep without a shepherd. So he began teaching them many things.

I also thought of Galatians 6:2
Carry each other’s burdens, and in this way you will fulfill the law of Christ.

Watching Jordan’s helplessness will prayerfully help me today look at others through Jesus’ eyes of compassion.  As much as I love Jordan…I know each person is a true treasure – though often disoriented, helpless and harassed.