We buried my father-in-law Saturday.  He was our last living parent.  It was a difficult few weeks for the family as his life left his physical body.  I felt honored to be there as he breathed his last breath.  He passed peacefully, and was appropriately honored.  I will miss him.

Often when we go through difficult times it seems to completely sap our energy.  We returned home Sunday –completely exhausted and a bit numb.  It seemed hard to re-engage in activity here, though we knew we soon needed to do so.  I realized it’s also been a while since I’ve written or wanted to write.  I felt the reality of a little anecdote I once read.  Can’t think. Brain dumb.  Inspiration won’t come.  Poor ink, bum pen.  Best wishes. Amen  …  Just felt I didn’t have a lot to give at the time.

I went to my Bible, where I knew I could regain focus.   I was reading from the book of John and this scripture ministered to me.   During times when you may feel a bit empty, I hope it will encourage you as well.  John 2:1-10 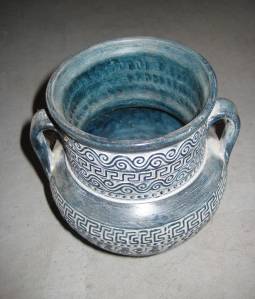 On the third day a wedding took place at Cana in Galilee. Jesus’ mother was there, [2] and Jesus and his disciples had also been invited to the wedding. [3] When the wine was gone, Jesus’ mother said to him, “They have no more wine.”

[5] His mother said to the servants, “Do whatever he tells you.”

[6] Nearby stood six stone water jars, the kind used by the Jews for ceremonial washing, each holding from twenty to thirty gallons.

[7] Jesus said to the servants, “Fill the jars with water”; so they filled them to the brim.

[8] Then he told them, “Now draw some out and take it to the master of the banquet.”

They did so, [9] and the master of the banquet tasted the water that had been turned into wine. He did not realize where it had come from, though the servants who had drawn the water knew. Then he called the bridegroom aside [10] and said, “Everyone brings out the choice wine first and then the cheaper wine after the guests have had too much to drink; but you have saved the best till now.”

I realize that I have felt sort of like an empty stone water jar.  So I took the lesson from Mary, Jesus’ mother and asked Jesus to be involved.  I asked him to refill my jar-= spiritually.  Though the jars Jesus filled began with nothing and were then filled with water,  he turned that water into the finest of wines….his first miracle.  I have often felt that resurgence of his presence in my heart through his Spirit.   I delved into his Word and  asked him for the energy that he powerfully inspires within me as I try to do His will.  He promises it.  He delivers.  I am so grateful!

28 It is he whom we proclaim, warning everyone and teaching everyone in all wisdom, so that we may present everyone mature in Christ. 29 For this I toil and struggle with all the energy that he powerfully inspires within me. Col 1:28-29 (NRSV)