Wisdom to Dig Deeply and in the Right Places

The purposes of a man’s heart are deep waters, but a man of understanding draws them out. (Proverbs 20:5)

I’m a person who often doesn’t immediately know what I’m feeling, and Wyndham has often helped draw out not only my emotions (especially if the feelings weren’t between us :-)), but also to help me understand their source. Once I understand the source of my emotions, it’s much easier to accurately adjust my perception.

The following descriptions of wisdom involve digging—the first from Kitty Chiles and the second from Gordon Ferguson.

Bud and Kitty Chiles became dear friends when we worked together for HOPE worldwide. Wyndham and I were novices in the non-profit humanitarian world, and learned so much from their vast experiences. Kitty shares the impact that Wyndham’s “digging below the surface” had on her life.

In the entry that follows, our dear friend Gordon also explains the wisdom in “excavating beneath the surface.”

I am grateful for this opportunity to express my love and respect for Wyndham, a spiritual giant in my life. While our years working with him and Jeanie were too short, they made a profound impact on me. I will share one short interaction that I have carried in my heart for close to fifteen years. 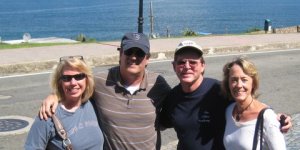 On one occasion, Bud, Wyndham, Jeanie, and I were talking about several challenging relationships.  I especially was struggling with having the courage (and love) to deal with a conflict and work through it. At one point, Wyndham looked at me and told me I was perhaps the most easily accused person he has known. I was stunned. No one had ever described me as “accused” in my then 20 years as a Christian. He went on to tell me ways this perception was playing out in my life and was crippling me spiritually; how Satan (the great accuser) was using it in my life. My personal antennae were so far extended that I was perceiving things about myself that were untrue. It was affecting my relationships across the board.

Since that day, I have been increasingly aware of this spiritual and emotional handicap. But Wyndham’s words have continually encouraged me. I have developed an awareness of Satan’s schemes in my life and how I can overcome them with God’s Word and the wisdom of Godly relationships like Wyndham. His wisdom and perception have changed my life. And I know that this Godly quality has enriched the lives of all those that he has touched with it. Thank you, brother.

When we moved to Boston a couple of days before the dawn of 1988, Wyndham and Jeanie picked us up at the airport. (We were paired as discipleship partners.) They had no clue what this relationship was going to mean to their life and schedule, trust me! I was a mess when we moved. If you are interested in seeing more of these details, see Chapter 9 in my book, “Fairy Tales Do Come True.” My being a mess led to our marriage being about the same. The Shaws started on a path that took us all through repeated marriage counseling sessions.

To my knowledge, they were the first to employ what we later were to call “marriage reconstructions.” Wyndham is nothing if not thorough, and thankfully along with it, patient. He left no stone unturned as he dug into our relationship, going all of the way back to our dating relationship 25 plus years prior.

At times, I remember being somewhat incredulous at the little details Theresa recalled—details about how I had hurt her. When I got ticked off and started being prideful and saying stupid things, Wyndham would say something like this: “Bro, just be quiet and let her share what’s on her heart.” He was determined to dig out anything from the past that might be impeding the present. Let me just say that it was an arduous process—but a process that changed my life and our marriage!

My good brother’s wisdom in this situation was shown by often going against the grain of conventional wisdom. That quality showed up many times during the years that we worked together in Boston, but I saw it early on and close up during that marriage counseling process. Conventional wisdom (much more conventional than wise) was to blame husbands for all marriage problems. After all, they were the leaders, right? And if leaders, responsible for all failures!

Wyndham flatly rejected that viewpoint, although it was definitely the prevailing viewpoint in Boston in the late 1980s. I think it would have been obvious to almost any sensible person that I was the main problem in our marriage. Thus, it would have been understandable if I was the only focus in counseling. However, while I was Wyndham’s main target, he didn’t let my little wife’s cuteness and submissiveness throw him off track. He dealt with her stuff too, very patiently and gently, but thoroughly.

Her view of authority figures had been very damaged by many in her life’s experience, me being one of that sad list. Wyndham won her heart over for life, becoming in the process the most trusted male in her life. He also became one of my most trusted, a man of wisdom who will be tightly bound in my and Theresa’s hearts forever!

Wisdom is not afraid to lovingly dig…and cares enough to do so.

I could fill a daily blog for years with wisdom I have learned from Wyndham. However, I’ll stick with one day a week. Each Wednesday I will share wisdom gleaned, not just from me, but from our family who saw him day and night and from friends near and far whose lives he has touched.

Many of you have already told me you wish to share wisdom you learned from Wyndham. If you wish to contribute to this collection please email me at shaw.jeanie@gmail.com with the subject line—Wednesday Wisdom. If you wish to receive these blogs in your inbox, feel free to sign up to follow the blog.

I’ll look forward to meeting you here on Wednesdays. And if you would, please remember us in your prayers. It’s a privilege to have you in our lives.

4 thoughts on “Wednesday Wisdom With Wyndham – 4”