We were pulling into Boston, with our car fully packed.  The year was 1987 and we were heading to what would become our new home.  We had our three children in tow, one dog, a few belongings and wondered what this new chapter of our life would bring.  I looked back at the children and noticed that our usually happy Sam, then four years old, was quite melancholy. I inquired as to the sadness of his demeanor.  His reply took me off guard.

Let me give you some background before I tell you his reply.  Sam was quite good at entertaining himself.  Though the children didn’t watch a lot of television, they did have a few favorites.  I thought Sam, as a youngster, would enjoy the usual Sesame Street type of programming.  However, he had no interest in such shows.  For Sam, even as a toddler, was mesmerized by anything having to do with sports.  I can still picture him in his high chair, joyfully watching football.  By the time he was four years old, he knew a lot about sports, even sports trivia.

Thus, I should not have been so surprised at Sam’s response as we approached our new home.  He responded to my inquiry with a sigh as he uttered, “Oh no, now I have to be a Patriots’ fan.”  This little four year old was realizing his move would come at a price. He had been mulling over in his mind the “fact” that he would now be an official fan of a team that was at the time – in a word – horrendous.

During the next several years New England Patriots paraphernalia was amazingly cheap.  In fact, you would think the organization would pay you to buy it.  You only wore a T-shirt if you had a jacket on that zipped up so it couldn’t be seen.  It was not encouraging to be a Patriots’ fan.  However, over time, how things can change!  It is possible to go from worst to first.  (or second 😦 ….I’m still a little tender from last night’s loss in the Super Bowl)  Now, my grown up son and his daughter proudly display their sports team loyalty. 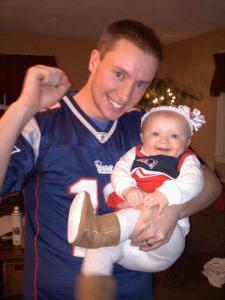 While I speak here of sports, there is a spiritual lesson in most every situation we encounter.  At times, there are circumstantial situations or areas of weakness that can keep reappearing in our lives, bringing about the same look of discouragement I noticed in my young son.  We can think that these things were made to bring us down, and will always be a sore spot.  When this happens, I am encouraged by two particular scriptures

The first is in 2 Cor. 1:8-9
We do not want you to be uninformed, brothers, about the hardships we suffered in the province of Asia. We were under great pressure, far beyond our ability to endure, so that we despaired even of life. [9] Indeed, in our hearts we felt the sentence of death. But this happened that we might not rely on ourselves but on God, who raises the dead.

Paul had experience severe hardships as he followed Jesus.  His trials called him back to reliance on God.  How easy it is, when things go well, to become self-reliant – and less mindful of our utter dependence on God for every breath and every step we take.

The next scripture has encouraged me again and again. While similar to the previous scripture 2 Cor. 12:7-10, encourages me by promising me that my weaknesses can actually  become my strengths.
To keep me from becoming conceited because of these surpassingly great revelations, there was given me a thorn in my flesh, a messenger of Satan, to torment me. [8] Three times I pleaded with the Lord to take it away from me. [9] But he said to me, “My grace is sufficient for you, for my power is made perfect in weakness.” Therefore I will boast all the more gladly about my weaknesses, so that Christ’s power may rest on me. [10] That is why, for Christ’s sake, I delight in weaknesses, in insults, in hardships, in persecutions, in difficulties. For when I am weak, then I am strong.
So, I figure if I hang in there, with true faith, any situation can become one that works for God’s glory, and my growth.  True joy and delight comes from this reality.